Charlotte Perriand, Low bench, from Cité Cansado, Mauritania, circa 1958. Stained pine, painted steel. Metal produced by Métal Meubles and wood produced by Négroni, France. Issued by Galerie Steph Simon, Paris, France. Trailblazer Charlotte Perriand burst onto the French design scene in her early 20s, seemingly undeterred by obstacles in an era when even the progressive Bauhaus school of design barred women from architecture and furniture design courses. She studied under Maurice Dufrêne at the École de l’Union Centrale des art Décoratifs, entering into a competition at the 1925 Expo des Arts Décoratifs by age 22 and gaining critical acclaim for her exhibition at the Salon d’Automne in 1927. On the heels of this success, that same year she joined the Paris design studio of Le Corbusier and his cousin Pierre Jeanneret. For ten years the three collaborated on "equipment for living," such as the iconic tubular steel B306 Chaise Longue (1928). After World War II, Perriand joined forces with Jean Prouvé to create modernist furniture that combined the precise lines of Prouvé’s bent steel with the soft, round edges and warmth of natural wood. In 1940, after a falling out with Le Corbusier, Perriand traveled to Japan to be an advisor on industrial design for the Imperial Ministry for Commerce and Industry. The experience proved invaluable to the development of her design aesthetic, in particular her love of the natural world and rustic materials. With one of her most famous commissions in the 1960s, Perriand designed rustic, sensuous pine furniture for the apartments at Les Arcs, a massive ski resort in France’s Tarentaise Valley. In 1983 Charlotte Perriand received the Legion of Honor, France’s highest award. Major retrospectives on Perriand have been held at the Musée des Arts Décoratifs, Paris (1985) and at the Design Museum in London (1998). 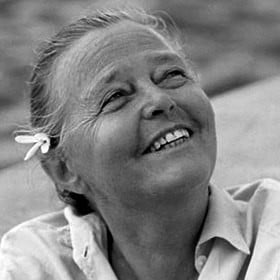 Charlotte Perriand is a French architect and designer. She is famous for her furniture which is directly inspired by the mountain and the Japan spirit.
View all pieces from this designer Scandinavian vintage bench with backrest by Olavi Hanninen for... Vintage coffee table in solid elmwood by Charlotte Perriand for... Pair of vintage stools by Charlotte Perriand for Les Arcs 1800, 1960