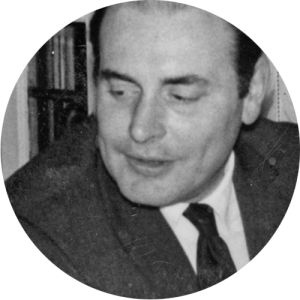 Pierre Disderot holds a special place in the French luminary of the twentieth century, that of the invention of modern light.

He was the creator and publisher of an elegant and modern avant-garde capable of competing with the best foreign productions. His history was also that of his friendships with the fine flower of French design of the 50s, Pierre Guariche, Joseph-André Motte, Alain Richard, Michel Mortier but also later with Olivier Mourgues, Etienne Fermigier or François Arnal. Biography Pierre Disderot studied engineering at the Breguet School but showed a great sensitivity to modern architecture, he joined the Espace group founded in 1951 by André Bloc, director of the magazine Architecture of today. In 1948, he opened the Pierre Disderot Workshops, specializing in the manufacture of lighting fixtures. Initially inspired by the classic creations of his time such as those of Perzel or the bronzers of art, he quickly turned to more innovative designs. It was his meeting with Marcel Gascoin that gave him the opportunity to discover two talented young designers, Michel Mortier and Pierre Guariche, members of his design office. From then on, the trio launched the first range of 'rational' lighting fixtures and many other successful collaborations followed for nearly 30 years: Joseph-André Motte, Gautier Delaye, Jacques Dumond, Bernard Durussel, Pierre Paulin, Roger Fatus... Many avant-garde models are born in his workshops. In 1955, he took part in the stimulating adventure of the ARP founded the previous year by the trio Guariche, Motte and Mortier with the aim of uniting publishers acquired with a demanding modernity. Pierre Disderot has the ability to surround himself with the best of his time, to listen to their talents, like Pierre Guariche's with metal, and to offer them the technological tool they dream of. Excellent designer himself, Pierre Disderot is much more than an industrialist for this generation