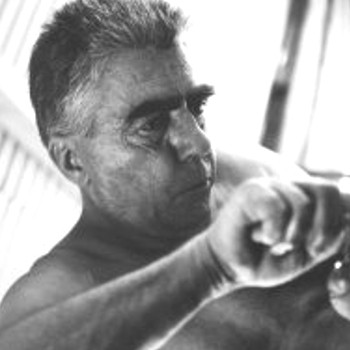 Roland Brice is one of the greatest ceramists from the 20th Century. His work is part of the monumental and mural art.

Throughout his career, he tried out a new style by moving away from the traditional codes. He worked during a particular context, the post-war which is a reconstruction period. Light, primary colors and round colors are at the heart of his approach as demonstrated by his earthenware plates, his vases and his ashtrays. Biography Roland Brice was born in France in 1911. He is renowned for being the pupil then the ceramist of the famous Fernand Léger. With him, he developed during five years a remarkable technical and aesthetic approach. With the death of Léger, Brice continued his work to develop his own style. He anticipated the new codes of Modernity and tried to promote monumental and mural art. He mastered with a great precision light, colors, forms and patterns. His will is to give his personal touch to concrete wall which were characteristic of the post-war cities. Roland Brice, thanks to a visionary approach and a real curiosity, is considered as one of the most important ceramist.