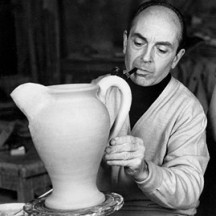 Pol Chambost is a famous sculpture and ceramist from the 20th Century. He is renowned for his vision of tableware and decorative arts.

He is a real prolific artist. During his entire life, he collaborated with great names of art, he explored shapes, colors, technical and trends to design innovative pieces. He created pieces with traditional but also original lines thanks to earth use. His style is unique. Biography Pol Chambost was born in 1906 in France. After studying at the School of Applied Arts, he followed his father’s footsteps and became a funeral sculptor. Few years later, he discovered ceramic and use it at the familial marble mason’s workshop then during the creation of his first pieces. Passionate by this art, he decided to found his own workshop. Afterwards, he enlarged his art and his technical and began production in series. He met with great success in France but also in the United-States. He had real responsibilities within an important association about ceramics in France. He was also present during shows dedicated to Decorative Artists and Home Economics. Today, Chambost is still a reference and a source of inspiration for artists.