A truly rare and beautiful late 1940’s desk constructed in polished steel and Tiger Stripe maple attributed to Florence Knoll and marked ’01 FK’. The earliest of all FK’s desks that entered the main stream was the model 17 wooden desk with louvre drawers that was constructed in maple. In the early 1950’s FK planning unit undertook a project for IBM to create a whole new series of desks that could be configured in a number of ways and settled on using a metal supporting structure that was either chrome plated or coated in black oxide. This design had numerous iterations over the years under various model numbers. However, in most cases, the designs featured a hanging (or floating) drawer unit or cabinet that was attached to the frame at the side and also attached to the underside of the top. In this desk we therefore have a hybrid of the original 1940s Model 17 with the louvered drawer fronts and the later 1950s metal frame models that started with the IBM contract and later went onto to become the classic Knoll desks that everyone recognises. In other words it’s the ‘missing link’ between the two. But it’s so much more than that… Firstly, it is produced in Tiger Stripe maple, otherwise known as curly or fiddleback maple which creates a chatoyant (cat’s eye depth often associated with gem stones) pattern, producing wavy lines known as flames; and this veneer is used on both the top as well as the whole cabinet including the drawer fronts. You’ll also see it has an inset glass shelf in the back of the cabinet. Secondly, it’s just the sheer quality of the construction and the fittings as can be evidenced by the large side bolts and hand polished metal frame. Finally, it has the ’01 FK’ impressed mark under the top which suggests it was either one of the prototypes that was made prior the IBM production or it was a totally unique bespoke piece made for a specific client. The latter is perhaps more the case as no expense has been spared in making the desk. As can be seen in the photos it’s presented in excellent vintage condition with only light usage marks to the wood and with only a few small dents and marks to the rust free polished steel frame. The Knoll International, Vincent Cafiero desk chair shown in the last 2 photos is a perfect match for this desk and is also available for purchase via one of my other listings on this website. 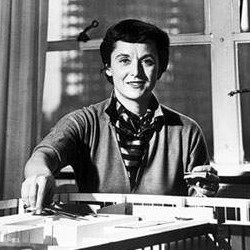 Florence Knoll is a famous American architect and designer. Pieces of furniture designed by Florence Knoll are known worldwide : chairs, sofas, tables,...All originals.
View all pieces from this designer Mid century coffee table with Formica top and steel base by...