Gae Aulenti (1927-2012), model "Arcata", Poltronova, Italy 1968, walnut and burgundy leather. Giuliana Gramigna, 19501980 Repertorio, Milan, Éditions Mondadori, 1985, p.264. Gae Aulenti (4 December 1927 – 31 October 2012) was a prolific Italian architect, whose work spans industrial and exhibition design, furniture, graphics, stage design, lighting and interior design. She was well known for several large-scale museum projects, including the Musée d’Orsay in Paris (1980–86) with ACT Architecture, the Contemporary Art Gallery at the Centre Pompidou in Paris, the restoration of Palazzo Grassi in Venice (1985–86), and the Asian Art Museum of San Francisco with HOK (firm) (2000–2003). Aulenti was one of the few women designing in the postwar period in Italy, where Italian designers sought to make meaningful connections to production principles beyond Italy. This avant-garde design movement blossomed into an entirely new type of Italian architecture, one full of imaginary utopias leaving standardization to the past. Aulenti’s deep involvement in the Milan design scene of the 1950s and 1960s formed her into an architect respected for her analytical abilities to navigate metropolitan complexity no matter the medium. Her conceptual development can be followed in the design magazine Casabella, to which she contributed regularly. Her contemporaries were Vittorio Gregotti, Giancarlo de Carlo and Aldo Rossi. W 123 cm, D 75 cm, H 94 cm, SH 45 cm 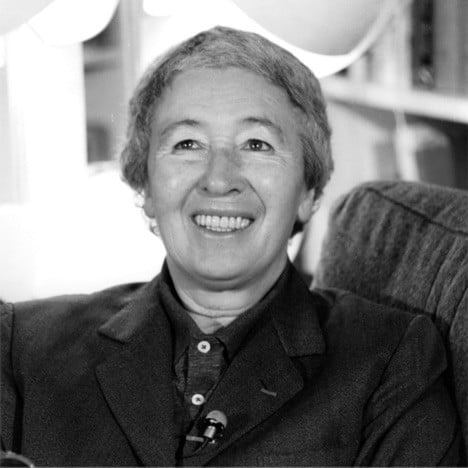