Gerrit Rietveld small table light "Tafellampje", designed the Netherlands, 1925. This example is one of several re-editions made throughout the 20th century after Rietveld’s original prototype design from 1925. It was previously part of an important private Dutch art collection. The table lamp with its strict geometric shape is made of metal tubing varnished black, red, and blue, the upper part of the spherical bulb painted black. Surprisingly modern for its time, it has never been produced in series. Rietveld offered the design to Dutch furniture and lighting manufacturer Gispen, but the company did not approve to take the light into production. It appears Gispen judged it as a nice study but had doubts with regards to the painted lightbulb and unstable construction of the light. An original lamp is now in the Museum of Modern Art, New York, and was a gift from the architect. Literature: - Stedelijk Museum Amsterdam, g.rietveld architect, Cat. no. 516, Amsterdam 1972 - Koch, Andre, Industrieel ontwerper w.h.gispen 1890-1981, De Hef 1988 - Baroni, Daniele - Gerrit Thomas Rietveld Furniture, London Academy Edition 1978. 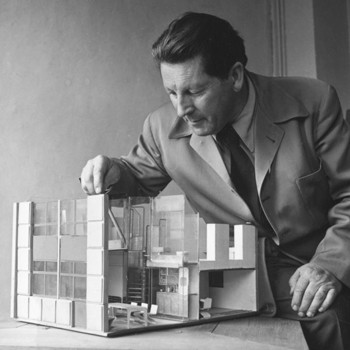 Vintage egg lamp by André Cazenave for Atelier A Vintage Crate Desk with Chair by Gerrit Rietveld for Cassina,...