Model 55 armchair designed in 1951 by Niels Otto Møller for J.L. Møllers Møbelfabrik. The armchair feature excellent design and woodwork and has been restored and refinished by our cabinetmaker to insure that it´s in very good condition with only minimal signs of age and use. The chair will be reupholstered with out extra charge in any "Kvadrat" fabric of your choice or papercord before shipping. In case you wish to handle the reupholstery by your self we will deliver the chair ready for upholstery with a discount. Born in Århus in 1920, the work of Danish designer Niels Otto Møller earned a reputation for consistent excellence in quality and workmanship. Møller’s dedication to his craft stemmed from his cabinetmaking apprenticeship, completed in 1939, which was followed by further study at the Århus School of Design. In 1944, Møller founded his own furniture production company, JL Møllers Møbelfabrik, in a tiny workshop in the center of his hometown. While overseeing traditional furniture production in his factory, Møller continued to design. The No. 1 Chair (1946) was the first result. For the rest of his life, Møller’s furniture designs would be produced by his own company. Møller’s chairs, such as the sculptural No. 55 and No. 71 (both 1951), strongly represent, through the choice of materials and the soft curves, the Scandinavian postwar vision of practical yet well-made design. By 1952, as the company grew, JL Møllers Møbelfabrik began to export to Germany and the United States. In order to keep up with demand, Møller expanded his production facilities. In 1961, he purchased a large piece of land in Højbjerg, a city close to his hometown. There, Møller continued to design dining chairs and armchairs in sculpted, organic forms in teak, oak, and walnut—exemplars of the postwar Danish modern style. In 1981, JL Møllers Møbelfabrik was awarded the Dansk MøbelIndustri’s Furniture Prize, with special mention for its "ability to combine the best craft traditions with modern furniture manufacture. Niels Otto Møller designed and produced a formidable number of chairs and his brand became synonymous the world over with good Danish design. This reputation was bequeathed to his children following his death. 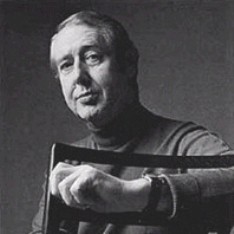 Niels Otto Moller is a Danish designer. He is the founder of the famous Company dedicated to furniture production J.L.Mollers Mobelfabrik.
View all pieces from this designer Set of 6 vintage teak and string chairs model N 75 from...