Jo Hammerborg created the Corona pendant 1963. It is one of his very first creations at Fog & Mørup and the first light he made with the "rim over slit"-effect in the centre. The inside of the black rim is painted light pink to give a distinkt coloured shine onto the brushed aluminium and the inside of the cone is dark to not bring ecessive light down through the opening at the bottom enhancing the slit effect half way up the cone. Simple but brilliant. This is a thick heavy metal cone compared to later lamps and it has mild scrapings and marks here and there but no dents. The wiring is brand new for security. Johannes (Jo) Hammerborg grew up right outside of Randers, in a regular middle-class family. He trained as a silversmith, participated in Denmark’s resistance and struggle for freedom in 1940-45 as a saboteur, studied at the Royal Danish Academy of Fine Arts and worked as a silversmith at Georg Jensen. In 1957, he was hired as a chief designer at the lamp manufacturer Fog & Mørup, where he worked until 1980. And now, decades later, his coveted lamps are in high demand, and they are being sold in antique shops. 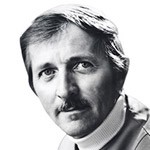 Johannes Hammerborg is a great Danish designer. He is renowned for the lamps he designed and for his work into the Fog & Morup company.
View all pieces from this designer Vintage rectangular industrial ceiling light made of metal and...