PH 43 lamp, an absolute classic, available by Poul Henningsen. produced by Louis Poulsen until today. The PH 43 lamp was launched in 1966. It was based on the same principle as other 3-screen systems, min. PH5. Poul Henningsen designed the 3-screen system as early as the 1920s, where we work with Louis Poulsen designed his first lamps. Throughout his life, PH tried to create glare-free light, directed only where it was needed to create soft light. The lamp is in very good condition, traces of time visible in the light, a small dent on the width of the shade visible in the photo. A new 2 meter braided cable was installed in it. 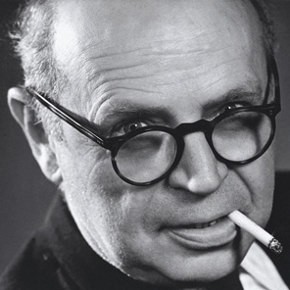 Poul Henningsen is one of the most famous Danish designers from the 20th Century. He is also known to be a writer, an art critic, a producer and an architect.
View all pieces from this designer Dutch hanging lamp manufactured by Raak in the Netherlands 1970s Glass and crystal pendant by Carl Fagerlund for Orrefors,... Iced glass Vintage hanging lamp made by Kalmar in Austria 1970